Interactions with the MYRTE project 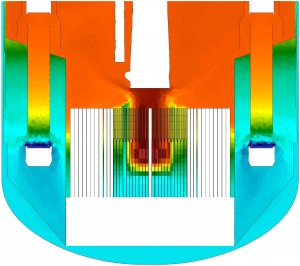 The last SESAME Progress Meeting in Brasimone (Italy) marked the end of the initial phase of the PHENIX Dissymmetric Test benchmark undertaken as part of WP5. This benchmark focuses on one of the End-Of-Life tests performed on the PHENIX reactor, a 250 MWe, pool-type SFR designed and built by CEA and EDF in Marcoule (France).

Connected to the grid in 1973, this reactor was operated successfully until the end of its design life in 2009 : before decommissioning, a number of tests were performed on the reactor, including a Dissymmetric Test where, starting from full power, one of the reactor’s Intermediate Loops was tripped, resulting in strong temperature dissymmetries within the primary pool.

Starting from test conditions and design information provided by CEA, participants from ANL, CEA, ENEA, KIT, IRSN and NRG modelled the reactor, reproduced its initial state and computed the target transient. All participants designed system-scale thermal-hydraulics (STH) models: in addition, ANL, CEA, KIT and NRG coupled their STH model to computational fluid dynamics (CFD) codes in order to better describe 3D effects in the pool, while ENEA used the 3D component of the RELAP5-3D code to obtain a finer description.

At the Brasimone meeting, results from CEA, ENEA, KIT, IRSN and NRG were compared to experimental data. All participants showed good overall agreement with the test results. In addition, participants using coupled codes were able to predict that the temperature rise during the test first occurs in the pump opposite the affected loop, a paradoxical phenomenon also observed in the test itself.

Overall, this first comparison was an encouraging step for the PHENIX benchmark. Over the next phase (which will continue until 2019), participants will be able to use the experimental data to further improve their models: this second phase will be concluded by a final comparison at the end of the project.