During the ANS Winter Meeting in Orlando (Florida) embedded Advances in Thermal Hydraulics (ATH) topical meeting, two out of three keynote lectures were provided by SESAME experts. The opening keynote was provided by Katrien van Tichelen on ‘Advanced Liquid-Metal Thermal Hydraulics Research for MYRRHA’. This keynote was very well received and obviously discussed amongst many other topics also topics covered by SESAME. Katrien received her certificate of appreciation from Dr. Sama Bilbao y Leon currently employed at the OECD/NEA. 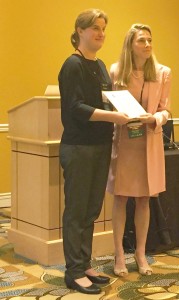 The final day of the conference started with the third keynote lecture which was provided by Prof. Iztok Tiselj. His lecture discussed ‘Direct Numerical Simulation and Wall-Resolved Large Eddy Simulation in Nuclear Thermal Hydraulics’. After the introduction the topic of DNS and LES, most of the work used by Prof. Tiselj was based on simulations performed within the THINS and SESAME projects. Iztok received his certificate of appreciation from SESAME colleague Ferry Roelofs. 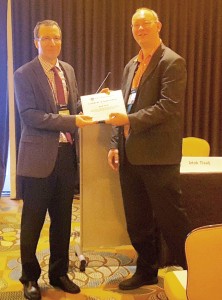